The Science of Striking

It was an honor to be part of this photo shoot at the Rochester Institute of Technology to capture a never before seen look at the force generated by striking a surface made to human soft tissue. To capture the force waves, professor @TedKinsman thought up and designed a new type of imaging using polarizing filters and a high speed digital camera system. The back surface of the gelatin was placed up against a brick wall, solid and immovable so the military grade gelatin would stay in camera and the energy would be fully transferred into it. The still images were taken a millisecond after impact and the resulting images are pretty amazing.

To see how it was done, check out: https://petapixel.com/2017/01/11/photograph-power-punch-using-polarized-light/

As a martial artist, I was very curious to see the way the force of the strike was transferred to the object. Through the imaging, you are actually able to see the energy transfer into the gelatin and how the energy moves through the material as a wave. 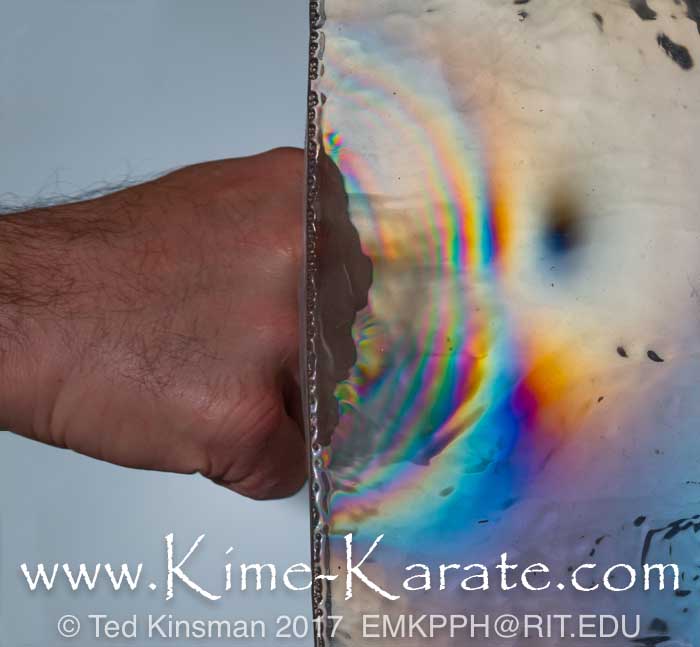 Viewing the still images, which were all taken at the same time from the moment of impact shows fairly consistent results for the “professional” karate punch done by Sensei Aric Keyes. With a definite wave of force emanating from the striking surface of the fist. The waves are close together and limited to the area of gelatin surrounding the striking surface. With the far side of the gelatin still unaffected by the impact at the time of capture and remaining clear. You may also note the edge of the gelatin remains straight and unaffected by the strike at this time as well.

That wave then travels away from the strike and becomes a force of it’s own as it moves through the object, losing energy as it as it goes until eventually stopped by the density within the material struck.

Interpreting this to human tissue, the greater velocity creates both greater pain and damage while striking. 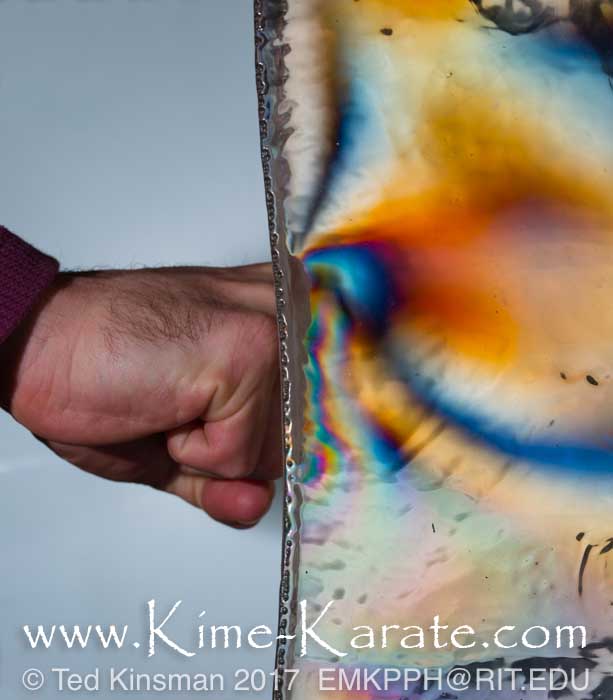 If you look at the image of the punch by the untrained individual, it looks quit a lot different. When first viewed, the image appears to be much more impressive, which as an image it is. There is much more to see visually having the waves spread out further showing a nice color spectrum through the surface. You can see a greater dispersion of energy by waves that reach all the way through the gelatin. Those waves are also thinker, showing less compression from the impact. The edge of the gelatin material is already curving as the gelatin block is moved more in unison from the impact.

Then you realize that that is it for the punch. It is near the end of the power being transferred into the material, while the trained punch is just beginning as the wave has yet to leave the fist to travel through the gelatin.

Think of this much like the difference of getting hit versus getting pushed.

Through viewing the high speed video, you are able to see the energy transfer over time, which you can’t see in the still images which were photographed separately. While watching the video, you can watch the first impact of the strike and the immediate transfer of energy as the first wave of energy zips through the gelatin. As the fist penetrates the material, there is a moment when the fist suddenly slows down, but does not stop. This is a brief moment just before the jacket sleeve shoots into the video. This the moment of maximum compression within the material.

However, the fist continues to drive through the material which then causes damage to the material as the natural limits of the gelatin have been exceeded.

Combining some of my favorite things, martial arts, science and photography; this was an amazing way to view the impact of striking.

About the Author: Aric Keyes

Register on our Website!
Sign up today to comment on our blog!
[ultimatemember form_id=13801] Kime Karate Website/Blog Registration. By registering on the Kime Karate website you will be able to create an account to comment on our blog. Join our community and post your comments. We will keep you informed about current events and information that can positively impact your life. Stay healthy & safe!
Close

I was so very happy to hear that you focused on how to stand strong, react to bullies, etc. in class. I feel so fortunate that you are teaching our kids. I am continually impressed with you and your dojo!!

I have learned a ton, even though I already had my black belt (from a different school). I feel my moves and body control are significantly better. And the style is less high-impact, so I hurt a lot less after class.

T. Poulsen, Adult Student
Register on our Website!
Sign up today to comment on our blog!
[ultimatemember form_id=13801] Kime Karate Website/Blog Registration. By registering on the Kime Karate website you will be able to create an account to comment on our blog. Join our community and post your comments. We will keep you informed about current events and information that can positively impact your life. Stay healthy & safe!
Close
Toggle Sliding Bar Area

We practice traditional martial arts that are based on practical, age appropriate self defense skills that are functional and effective.

Join us for a class!

If you are at all interested in finding a class for you or a child, you have got to try a class! You can request a free class by clicking on one of the links below or by calling us at 223-2870.

Enter your email address to receive a coupon for 50% off your first month of classes!

Check your email for our coupon code!